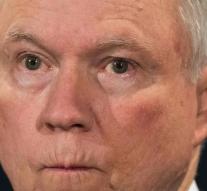 washington - US President Trump has cut off his finance minister Jeff Sessions in a recent interview with The New York Times (NYT). Trump said he would never have appointed him if he had known that Sessions did not want to interfere with investigating any Russian interference with the US elections.

'Sessions should never have withdrawn from that research and if he wanted, he had to tell me first before he assumed the ministerial post. And then I had taken someone else, 'complained Trump.

Sessions stated in March that he does not interfere with the FBI's investigation into alleged Russian interactions because he might be able to be a party in the subjects being investigated. Trump called this in the NYT 'very unfair to the president. '