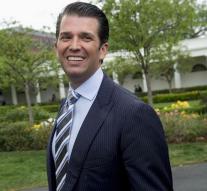 washington - Donald Trump Jr. Was informed by email that the information about Hillary Clinton was an attempt by the Kremlin to help his father in the saddle. That reported The New York Times Monday on the basis of three people who knew about the mail.

The eldest son of US President Donald Trump confirmed Sunday meeting with a Russian advocate, from whom he would receive the taxing material. She would have ties with the Russian government, but Trump Jr. Did not know to be aware of it.

The e-mail proves, according to the three initiates, that the Kremlin was the source of the burdening information. But there is no indication that there is a connection with the thousands of hacked emails from the Democrats, who eventually joined WikiLeaks.

The meeting between both took place on June 9, 2016. That was two weeks after Trump won the Republican presidential election. During the conversation, Trump's son-in-law, Jared Kushner, and then Campaign Manager Paul Manafort were present.

The e-mail can be important evidence in the investigation of, among other things, the FBI about possible Russian interference during the presidential elections. The relevant mail is from publicist Rob Goldstone, who also worked for British tabloids. He would have arranged the meeting.

A spokesman for Trump Jr. Confirms contact with Goldstone. However, according to the spokeswoman, Goldstone was not aware of the information the advocate had. He dismisses the case as 'a lot of hassle for nothing'.