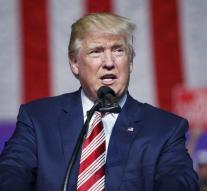 - Donald Trump wants to recognize Jerusalem as the undivided capital of Israel. That the presidential candidate of the US Republican Party, according to the Israeli newspaper Haaretz said Sunday in an interview with Prime Minister Benjamin Netanyahu.

Furthermore, Trump said that military aid to Israel and cooperation to develop a defense against missile ' an excellent investment would be for America. '

The Palestinians demand by Israel annexed east Jerusalem as capital of their future state.

Netanyahu also spoke Sunday with Hillary Clinton, Trump's main rival in the battle for the US presidency in November. The former foreign minister said a strong and secure Israel is essential for the United States, Haaretz wrote. They spoke out against any attempt from outside to impose a solution to the Israeli-Palestinian conflict, including through the United Nations Security Council.

Netanyahu was in New York for the UN General Assembly.