Home / World / Trump is on profit 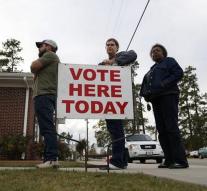 The forecasts yet not surprising. Clinton nor Trump has won in states that normally go to the competition.

At present Clinton on 131 electoral votes and Trump at 168. The candidate who collects 270 electors or more, wins the elections.