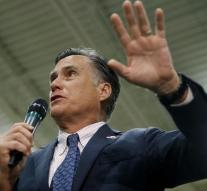 - Donald Trump is considering to former Republican presidential candidate Mitt Romney the post of foreign minister. This was reported by the American channel NBC News. Romney was invited for Sunday to come and talk about the post.

The message was notable because Romney during the campaign was highly critical over the next US president. He called dangerous '' rhetoric of Trump even ' and was afraid of the effect that would have on the billionaire American community. ' If racism, bigotry and sexism top-down flow is extremely dangerous for the character and heart of America. ''

The former governor of Massachusetts lost the 2012 race for the White House by the current President Barack Obama.