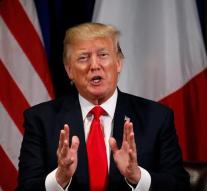 new york - US President Donald Trump is considering holding a military parade in Washington on Independence Day (July 4th). Trump says inspired by the parade he saw in Paris on the French national holiday.

Trump came up with the idea at the start of a meeting with French President Emmanuel Macron on Monday at the margins of the United Nations General Assembly in New York. Trump said he had asked his White House Chief of Staff, Retired General John Kelly, to look into the possibility of organizing such a parade for US military power.

Trump said he had wondered about the French parade he saw with Macron on July 14th. 'To a large extent, through what I witnessed, we could do something like this on 4 July in Washington along Pennsylvania Avenue,' he told reporters. 'We're really looking forward to it. '