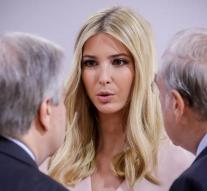 washington - US President Donald Trump defended his decision on Monday to temporarily let his daughter and adviser Ivanka invade him at the G20 summit in Hamburg. Trump stressed on Twitter nothing to do strange.

'When I left the conference room for short meetings with Japan and other countries, I asked Ivanka to keep my place occupied. Very common, 'twittered Trump. 'Angela M. agrees,' he continued, referring clearly to German Chancellor Angela Merkel.

Trump concluded that his former archival Hillary Clinton would be treated differently under the same circumstances. 'If Chelsea Clinton would receive her mother's place because her mother gave away her country, it would say Nep news: Chelsea must become president,' the president complained.