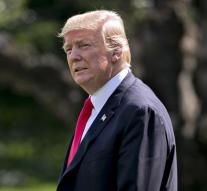 washington - President Donald Trump called on Republican senators on Monday to 'do the right thing' and to revoke and replace the care system of his predecessor Barack Obama, as they have promised for seven years. The American people have been waiting for it long enough, now it's time to add the deed to the word, said Trump. He spoke in Washington for an audience of families allegedly injured by the 'Obamacare Nightmare'.

The senators decide on Tuesday whether they want to start a debate on the revision of the law. If so, then a care act adopted by the House of Representatives in May is likely to be the starting point for further discussions.

The Republicans want to abolish health care legislation as from 2010, which they consider to be an infringement of the government in the insurance market. But they can not agree whether the law should be repealed and replaced or withdrawn. In the first case, 22 million Americans would lose their medical expenses, in the second case, eventually 32 million, according to the budget office of Congress. The premiums to be paid are also rising sharply.