Home / World / Trump in the gap for proponents 'Brexit' 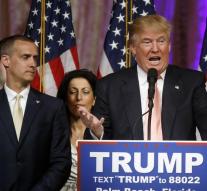 london - Republican presidential candidate Donald Trump has stressed that the British do not come back to stand in line under his presidency for new trade agreements with the US Trump said this in an interview with British channel ITV broadcasting the interview Sunday.

Trump took away from the sayings of the Democratic President Barack Obama. Who warned the British last month during a visit to London expressly to leave the European Union (Brexit).

Britons go to the polls June 23 for a referendum on whether they may or may not be an EU member. Obama warned that they get back in line to face new trade agreements with the US, as they leave the EU. Trump said that this definitely will not be the case, if he becomes president. It does not matter to him whether Britain EU member or not.


The Republican Party points to the convention from 18 to July 21 in Cleveland on its presidential candidate. Americans elect a new president November 8.