Home / World / Trump in France for a two day visit 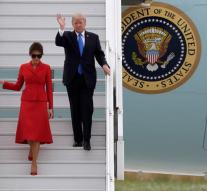 paris - US President Donald Trump arrived in France on Orly, south of Paris, on Thursday. He brings a two-day visit to the country at the invitation of President Emmanuel Macron.

Trump attends the celebration of the national holiday on July 14 and participates in the commemoration of the First World War. It is exactly 100 years since the Americans were in the Great War.

The planned visit is seen as a sign that the countries want to tighten up, although they have previously hit climate change. The White House stated in a statement that Paris and Washington want to expand cooperation, including in the fight against terrorism.