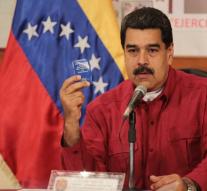 US banks can no longer buy bonds from the Venezuelan state or state-owned oil company PDVSA by the decree. This has to tighten the regime's access to foreign currency.

Other commercial and humanitarian transactions are still permitted, including the import and export of oil, according to the White House. Venezuela, a major oil country, exports a lot of oil to the United States.

The United States ambassador to the United Nations, Nikki Haley, said Friday that the US will not tolerate the 'dictatorship' that Maduro tries to establish.