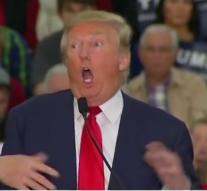 - Donald Trump denies having made ​​a disabled journalist ridiculous. "I would never taunt a person with a disability," said US presidential candidate at a campaign rally.

Trump recently clashed with journalist Serge Kovaleski after the presidential candidate had used an article by the reporter to defend a controversial statement. The Republican said he had seen cheering after the attacks on the World Trade Center in 2001, thousands of people in Jersey City.

The businessman later pulled out an article from Kovaleski, who had written at that time that a number of people were reportedly arrested for celebrating the attacks. The journalist, who can move joints are limited, then said that he did not remember to have delivered proof that people had massively stand cheer.

That went against the sore spot of Trump. He imitated Kovaleski during a speech, using his arms erratically moving back and forth. That was not an insult, said Trump, who has donated millions to their own words to help the disabled.