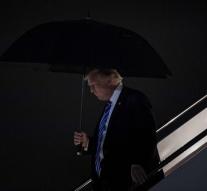 marigot - Hurricane Irma has potentially affected US President Donald Trump. He owns a luxury estate on the French part of Saint Maarten, heavenly two kilometers from the border with the Dutch part. In addition, the hurricane drives off at its resort in Mar-a-Lago, Florida.

The Trump estate on St. Maarten is the Château des Palmiers, a walled beachfront on the west side of the island. The country house has five bedrooms and in a garden house there are another four bedrooms. Furthermore, the property has a heated swimming pool, a hot tub, a power shower and a tennis court.

Trump has bought the estate earlier this year. He initially asked $ 28 million, converting over 23 million euros, but dropped $ 16.9 million this summer. Awaiting a buyer, he leases the estate. The price in the high season is $ 20,000. Per night.

It is not known how the Château has met the hurricane Irma. The French authorities fear that there is little left on the island.

Irma is currently located north of the Dominican Republic. The hurricane descends on Cuba and then travels to Florida. In the U.S. state, Trump is his main residence, Mar-a-Lago, where he spends a lot of time. He also has three residential towers and a golf course at Miami.