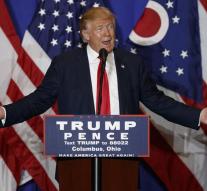 - Trump has often threatened in the past with lawsuits against the media, but he really has not sued the newspaper last two decades. According to research from Reuters that consulted the databases of various courts.

The New York Times published a story Wednesday in which two women claiming to have been molested years ago by Trump. He is now demanding that the article be rectified, he threatened with a lawsuit.

In recent years he has voiced similar threats towards the Wall Street Journal, the Village Voice, the New York Post and Fortune Magazine. In no case these words are followed by deeds.

The last time Trump a media company sued for defamation was in 1984. A reporter from the Chicago Tribune classified the plans of the real estate magnate for a 150-storey skyscraper in Manhattan (New York) as ' ghastly, ugly monster. 'The Judge the newspaper gave equal and thereby pointed to the freedom of expression.