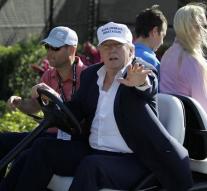 turnberry - The American business magnate, billionaire and controversial presidential candidate Donald Trump Friday officially opens its Scottish golf resort in Turnberry. The golf and hospitality complex was bought by Trump in 2014. It's actually already open, according to The Scotsman newspaper many guests complain bitterly. The newspaper says that more than a quarter of the hotel reviews on the Internet is negative. So the food is horrible,, as '' defined and guests complaining that they had to sleep in a room with no curtains or Luxaflex in the 'luxury' resort.

In the poor area is the 175 million euros Trump in the refurbishing of the complex has put gratefully received. It employs 340 people. But among more racist and anti-Islamic statements of Trump in the struggle to throw the US presidency a shadow over the lovely landscape golf courses, 70 kilometers southwest of Glasgow. Scotland's First Minister Nicola Sturgeon has previously Trump declined the honorary title GlobalScot. Numerous protesters against Trump go Friday to the opening of the hotel, which has a 110 year history.