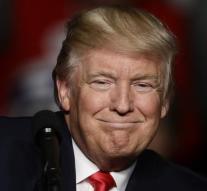 washington - US President Donald Trump welcomed the statement by the fired FBI director James Comey that he was not suspected of investigating the influence of the US elections in 2016 by the Russians.

That revealed Trumps lawyer following the written testimony of Comey, published on Wednesday. 'The president is pleased that Mr. Comey has publicly confirmed that the president was not under suspicion,' said the lawyer. 'The president feels completely right. '