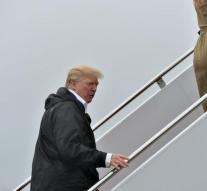 houston - President Trump flies to Texas for the second time in a few days. He visits this time, among others, the city of Houston, which is heavily affected by rainfall. Last week he was in Corpus Christi and Austin, Texas's capital.

In Houston, the water level is currently slowing down. The residents who return can see for the first time the damage to their homes and other possessions. Trump has announced that the residents of the city will talk.