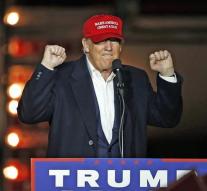 - Donald Trump as president will not attract a lot of international use, immediately apparent in the first days after his election. Where it is normally customary call a newly elected president for brief consultations with the leaders of the major allies, Trump chose to look for contact only with countries such as Ireland and Egypt.

Prime Minister Theresa May of Britain, traditionally one of the main allies of the United States, became the tenth call from Trump. The leaders of Egypt, Ireland, Mexico, Israel, India, Turkey, Japan, Australia and South Korea went for her.

Especially the fact that the Prime Minister of Ireland, Enda Kenny, was previously called than May against the sore spot of the British. Trump invited Kenny to returning next year to come celebrate the Irish holiday St. Patrick's Day at the White House.

'It is as if we are at the end of the row,' tweeted Tim Farron, the leader of the Liberal Democrats.

In his conversation with May Trump said he has warm personal ties with Britain and that he is confident that the special relationship between the two countries as he remains so strong. He also invited May to meet as soon as possible.