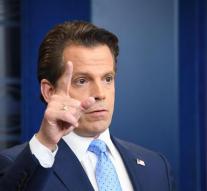 washington - President Donald Trump has distanced himself from Anthony Scaramucci's remarkable remarks about Chief of Staff Reince Priebus and Steve Bannon strategist. Monday's communication head of the White House last week in an interview with The New Yorker set the first as 'paranoid schizophrenic' and endorsed the other of 'self-pity.'

'The president is absolutely of the opinion that Anthony's statements are inappropriate for someone in that position and he did not want to charge General Kelly,' said spokeswoman Sara Sanders Monday, a few hours after John Kelly officially went to work as the new Chief of Staff of the White House.