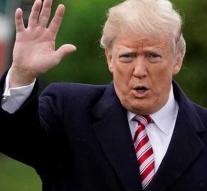 washington - US President Donald Trump felt misled by his own staff after the US had expelled dozens of Russian diplomats. He apparently thought that other countries would send roughly the same amount of Russians as Washington, said a high government source against The Washington Post.

The diplomatic penalty measure followed the poisoning of the former Russian double spy Sergei Skripal and his daughter. Trump was told in advance by his associates that his country would be about as many Russians as the European allies of the USA. 'We will equal their numbers', Trump said according to the source. 'We are not taking the lead. We equal. '

The president was startled in anger when he discovered that France and Germany emitted far fewer diplomats than the sixty who had to leave the US. He was then told that the Europeans sent out about the same amount of Russians as the United States.

'I do not care about the total,' Trump replied, according to the source, that he had been misled.