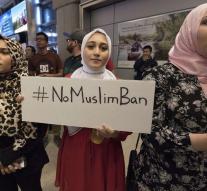 washington - The US Supreme Court bends Monday on the proposed ban on entry of President Donald Trump for residents from six Islamic countries. Previous laws for a temporary ban have been rejected by lower courts in recent months.

Earlier this month, the 9th Circuit Court in San Francisco, which handled the appeal, came to the conclusion that the verdict of a federal court in Hawaii, which blocked key parts of Trumps Decree in March, was right.

On 25 May, a court in the Virginia state appealed to the same verdict after a court in Maryland had referred Trump's plans to the trash. The White House informed the Supreme Court that it would still be possible to remove travelers from Yemen, Sudan, Somalia, Syria, Libya and Iran from the US.