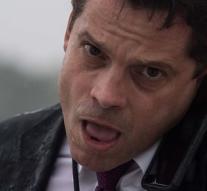 washington - US President Donald Trump would have given Anthony Scaramucci the bag. That reports The New York Times.

Scaramucci was appointed only as a new communications director of the White House ten days ago, but has not made himself popular. Whether he gets another job in the White House, or if Trump would rather be lost to him, has not yet been announced.

Trump said goodbye to Reince Priebus, the head of the White House last Friday. Trump announced on Twitter that he appointed John Kelly, the Minister of Internal Security, as a substitute.