Home / World / Trump drops further away after series of scandals 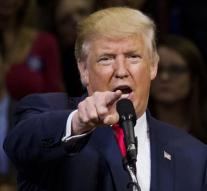 - With only four weeks to go until the US presidential election Donald Trump seem opportunities continue to shrink further. The scandals surrounding the Republican candidate accumulate rapidly and Clinton's lead grows in the polls.

Surveys are generally conducted over a period of several days and then analyzed, so it is too early to draw conclusions on the impact of the debate on Sunday. But the video of Trump seemed to brag about the rape of women appeared Friday, and is therefore already included in some polls.

NBC and The Wall Street Journal probed Saturday and Sunday people likely to vote and 52 percent preferred Clinton, compared to 38 percent for Trump. If the libertarian and green candidates are factored Clinton's lead shrinks slightly, but still amounts to eleven percentage points.