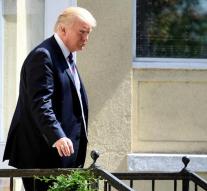 washington - US President Donald Trump does not rule out an attack on North Korea. 'We'll see,' said Trump when asked for a possible attack.

The president, on Sunday, held talks with Japanese Prime Minister Shinzo Abe about any measures following Pyongyang's latest nuclear trial. Previously, he responded to Twitter: 'North Korea is a villain state that pose a big threat to China, which tries to help but with little success. '

Trump also argues that the indulgent approach that South Korea is facing in North Korea does not work. 'They only understand one thing. '

Following Trump, Emmanuel Macron and Angela Merkel made a joint statement stating that 'the EU must take steps now'.

READ MORE: Macron and Merkel: EU needs to respond too

For Sunday's hydrogen bomb, Trump warned that North Korea had to keep in mind 'fire and anger' as it continued to threaten the US. He also said that 'talking not the answer' is on the attitude of Pyongyang.

North Korea showed Sunday to have tested a hydrogen bomb. The nuclear weapon should eventually be mounted on a long-range racket. According to Pyongyang, the test was 'perfectly successful. '