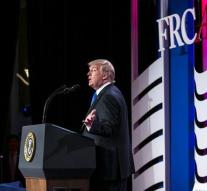 washington - US President Donald Trump indeed announced Friday that he will not certify the Iranian nuclear program agreement. The Foreign Minister Rex Tillerson thus confirmed leaked messages from, among others, The New York Times.

That Trump does not certify the agreement formally means that he indicates that Iran is not in agreement with his eyes. Congress will then have 60 days to decide whether sanctions will be imposed again. Those penalties are frozen because of the agreement.

The step of Trump does not mean that the US withdraws from the agreement. 'What we are doing is paving the way that we give the best starting point to try to fix the deal,' said Tillerson. If it does not work, then, according to the minister, the US can still get out of agreement.

According to Trump, the agreement is better for Iran than for the United States. He wants Congress to implement a tight Iran policy and Tehran calls for wider access to nuclear complexes.