Home / World / Trump did not know anything about controversial meeting 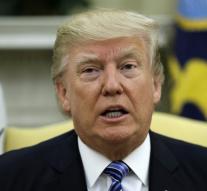 washington - The son of President Donald Trump did not inform his father about a controversial meeting with a Russian lawyer. 'There was nothing to tell,' said Donald Trump Jr. on Tuesday night against Fox News.

The oldest son of the current president sat at the table with Russian advocate Natalia Veselnitskaya. Trump Jr. was promised for the meeting to have information on Hillary Clinton, the then Democratic presidential candidate.

Trump Jr. published the email exchange with an intermediary prior to the meeting on Tuesday. This shows that he was informed that the information came from the Russian government, who would like to support his father. That disclosure is sensitive because of the alleged Russian interference in the presidential elections.

The president's son repeated at Fox that in the end his meeting with the lawyer did not yield anything. 'It was a waste of twenty minutes. 'He said that there were no alarm bells at that time because the conversation took place for the current' Russia fever '.