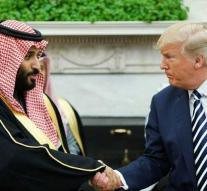 washington - US President Donald Trump does not rule out that the powerful Saudi Crown Prince Mohammed bin Salman had knowledge of the murder of journalist Jamal Khashoggi. 'Maybe he had that, and maybe not,' says the president.

The death of Khashoggi, a columnist for the Washington Post, has also led to a stir in the US. Trump says that his government does not approve the killing of Khashoggi, but intends to remain a 'steadfast' ally of Riyadh. He calls Saudi Arabia a 'great ally in our very important fight against Iran. '