Home / World / Trump: Crimea would rather belong to Russia 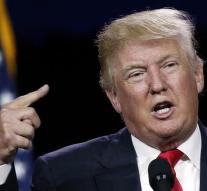 - The inhabitants of the Crimea would rather belong to Russia than Ukraine. That the Republican presidential candidate Donald Trump said Sunday in an interview with ABC.

Trump was asked about his admiration for Russian President Vladimir Putin and whether he bends when it comes to Russia's annexation of the Ukrainian peninsula.,, Hey, you know me. I bow out, okay? I do not bend '' says Trump.,, But you know, the people of Crimea, from what I've heard, would rather belong to Russia than they were before. ''

Then seemed to guarantee the disputed property magnate Russia Ukraine will not enter.,, He is not in Ukraine, it's just so you know. He does not go to Ukraine, okay? Write that down, '' Trump stressed about Putin.


,, Well, he is already there, right? 'The interviewer said.