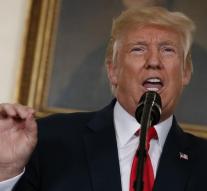 'Racism is an evil one. Those who cause violence in their name are criminals and villains, including Ku Klux Klan, neonazi, white racists and other hateful groups that are incompatible with what we value Americans, 'said Trump in the White House after his golfing vacation Interrupted.