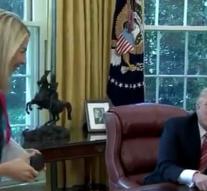 washington - During a telephone conversation with the recently elected Irish government leader Taoiseach Leo Varadkar, US President Donald Trump was distracted by the appearance of an Irish reporter.

Trump called Varadkar, the first openly gay premier, to congratulate him on his victory. But journalist Caitriona Perry threw soot in the food. The Irish were part of a group of journalists who should be present at the Oval Office during the telephone conversation. 'We have a bad Irish press here. Where are you from? Come here, 'said Trump to the journalist. Varadkar had to wait for a while while Trump appealed to the blonde reporter.

As if the situation was not uncomfortable enough, Trump Varadkar then told Perry that he had a beautiful smile. Then he told the prime minister: 'I assume she is doing well with you. 'What Trump thought when he said that is not entirely clear. Apart from the fact that Varadkar is homosexual, a suggestive sexual comment is generally not very appropriate during a public telephone conversation between two world leaders.