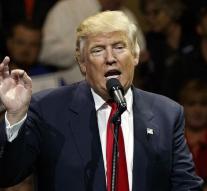 - The upcoming US presidential Donald Trump has criticized the JSF program. 'The costs are out of control,' he wrote on Twitter.

Trump announced after his inauguration to save billions of dollars 'in military (and other) purchases. 'It is still unclear whether he also wants to cut down on the F-35. Netherlands has played a role in the development of the fighter and want to purchase multiple devices.

The Joint Strike Fighter is a sensitive issue in politics Hague. Only after years of debate the government cut the knot in September 2013 by.