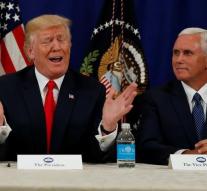 bedminster - US President Donald Trump says 'very close' to be a decision on US military effort in Afghanistan. It is currently undergoing a review and could see a possible increase in troop strength.

'We're coming close, very close,' Trump told reporters at his golf club in New Jersey when he was asked about Afghanistan.

Trump has to make a decision about the proposals of his military advisors to send 3000 to 5000 additional troops to Afghanistan. Currently, the US and coalition countries have deployed approximately 8400 US and 6500 coalition groups, mainly to train and support Afghan troops.

Until now, Trump has often turned to the US's leading role in foreign military missions. He finds that the costs do not outweigh the benefits and that Americans are in danger of getting the chestnuts out of the fire for others.