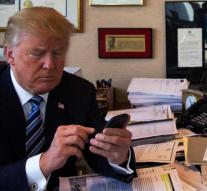 new york - A federal judge in New York has forbidden Donald Trump to block Twitter users who do not like him. By doing so, the American president violates the right to freedom of expression as laid down in the First Amendment of the Constitution.

District judge Naomi Reice Buchwald made that statement in a case filed in July by the Knight First Amendment Institute of Columbia University and several individual twitterers. Buchwald agreed with the prosecutors that the discussions that arise from Trump's tweets should be seen as a public forum.

She rejected the Justice Advocates' argument that under the same important law article Trump has the right to exclude people with whom he does not wish to interact.