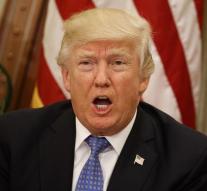 riyad - US President Donald Trump will call on Arab leaders to protest against Islamic extremism during a speech on Sunday. In his speech, following his visit to Saudi Arabia, he says he sees the fight against terrorism as a battle between good and evil and not as a struggle between civilizations.

'This is a fight between barbaric criminals who want to destroy human life and decent people of all religions wanting to protect it,' Trump said, according to a summary of his speech released by the White House.

'This means that we must fight against Islamic extremism and Islamic terrorist groups. And it means that we as a man must form a front against the assassination of innocent Muslims, the suppression of women, the persecution of Jews and the slaughter of Christians, 'said Trump.