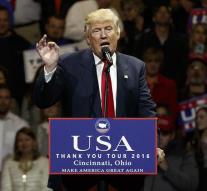 - Future president Donald Trump on Friday had telephone contact with the Taiwanese president Tsai Ing-wen. It is the first time since 1979 that at this level contact between the United States and Taiwan. That year Washington broke off diplomatic relations with Taiwan and buttoned them just with China, which sees Taiwan as a renegade province.

According to Trump's transition team, which prepares him for his time in the White House, reported that the two leaders talked about ' the close ties between the United States and Taiwan in the fields of economy, politics and security.

The striking action Trump will most likely not well covered by the rulers in Beijing. Who since President Jimmy Carter called the one-China policy took as its starting point in 1979, used to maintain China as the only official relations with Washington.