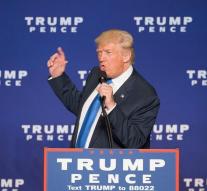 - Who on Twitter debate between Donald Trump and Hillary Clinton followed, was presented with a clear winner. Republican rival seemed to have wiped out completely. Now it appears that a third of all tweets from the Trump camp were from bots: an impressive feat of election manipulation so.

Although the University of Oxford discovered that both candidates were helped by a handful of Twitter bots, The Next Web calculated that Trump better simply did their best. For example, a half million tweets there were in favor of Trump hurled on the web. The conrast with Hillary's 'army' is large: its impact sent out only 137 000 tweets.

The Nex Web concludes that one third of all pro-Trumptweets were from bots. Or the fake tweets were sent out by the campaign teams, is not clear. Incidentally BBC reports that Trump Twitter would have emerged from the bus crash without a winner.

A so-called Twitterbot is a piece of software that places automated messages on the microblogging. In order to be able to achieve that, a form of artificial intelligence is used. In this way, can be sent messages that look like they were written by a man.