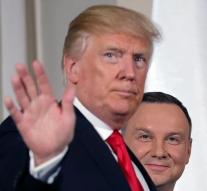 warschau - On his second foreign trip, US President Trump started talks with European leaders in Warsaw on Thursday. He was received by Polish President Andrzej Duda prior to a summit with twelve Central and Eastern European leaders.

They want to know, among other things, of Trump how he thinks they can become less dependent on Russian energy. Trump is expected to have plans for the export of American liquid gas to the region.

According to his entourage he gives a press conference with Duda. Afterwards, in Warsaw, he holds a speech at the monument reminiscent of the rebellion in the battered city against the German occupiers in 1944.

Many Eastern Europeans hope that Trump confirms the 'transatlantic relations' in his speech and that he tempers his criticism of NATO. Since the crisis in Ukraine escalated in 2014, Baltic States and Poland feel threatened by Russia.

After the speech, Trump goes to Hamburg for a dinner at the Atlantic hotel with Chancellor Angela Merkel. Friday and Saturday, in this port city, world leaders gather for a G20 summit.