Home / World / Trump asked Mexico to be silent about wall 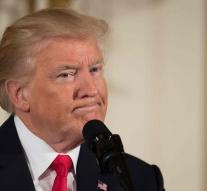 washington - US President Donald Trump has asked his Mexican ambassador Enrique Peña Nieto to stop his public resistance against the wall between Mexico and the United States.

Nieto told the media that Mexico would not pay for the project. 'You can not say that to the press,' Trump said several times, reports The Washington Post on Thursday based on transcriptions of a phone call that the two presidents conducted in January.

The construction of a wall to stop Mexican migrants was a major election promise by the US president. He would pay Mexico for the costly project. However, during the telephone conversation, Trump said that the financing of the wall would 'succeed in some way'. He called the wall issue a 'political problem for both'.

If the Mexican president continued to say that his country would not finance the wall, Trump would not want to meet him anymore.