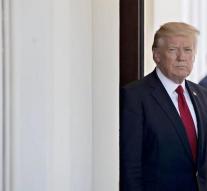 riyad - US President Donald Trump arrived in Saudi Arabia on Saturday morning. The Arab television channel al-Jazeera showed pictures of the president's office at the airport of the capital Riyadh.

Saudi Arabia is the first country to visit Trump during his first foreign trip as US president. He also goes to Israel, the Vatican, Belgium and Sicily.