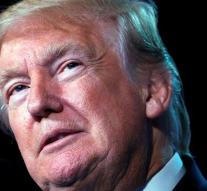 washington - Anyone who watched television or computer screen on Thursday while former FBI director James Comey spoke to Senate's intelligence committee: not Donald Trump. The US president spoke to the other side of Washington.

Trump suggested that their movement was 'under fire'. 'But we'll get bigger and better and stronger than ever,' he said. 'We will not stop us from doing what is right. We know how to fight and we will never give up. '