Home / World / Trump and Romney put a fight on 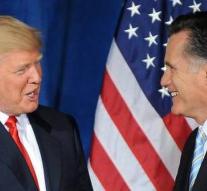 - Upcoming American president Donald Trump and Mitt Romney on Saturday resolved their quarrel. They had private golf at the Trump in New Jersey a 'profound' (Romney) conversation that 'went great.' According to Trump

During the campaigns, Romney had said Trump on foreign land 'not very clever' was and would be dangerous as president. Trump, in turn, Romney taunted because he could not beat Barack Obama in 2012.

The conversation between the two led to speculation about the role of Romney in the government of Donald Trump, possibly as foreign minister. Others mentioned are former New York Mayor Rudy Giuliani, former UN ambassador John Bolton and Sen. Bob Corker for this function.

A confidant of Romney called it 'unlikely' that Romney is foreign minister. The Saturday meeting was more to 'give the hallmark of confidence to Republicans who do not know whether Trump should or should not support,' he said.