Home / World / Trump and Putin talk each other around G20 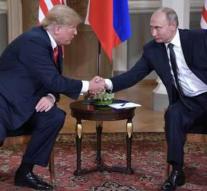 moscow - It seems that the presidents of the US and Russia will meet on Saturday at the G20 summit in Argentina. Various media reported having seen a Kremlin document about that meeting.

It states that the US head of state Donald Trump and his Russian counterpart Vladimir Putin will meet at the end of the morning (Argentine time) in Buenos Aires. The presidents, according to the document, have two hours for this.

The White House has not yet confirmed the meeting. Trump has hinted in the past few days to doubt the meeting given the tensions between Russia and Ukraine.