Home / World / Trump and Putin are agree on everything 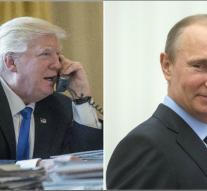 washington/moscow - Trump president of the United States and his Russian counterpart Vladimir Putin have agreed on the necessity of restoring the economic and trade relations. Whether that also means that the US economic sanctions were lifted or even reduced to Russia, is not clear.

Trump and Putin spoke by phone Saturday together. For all gave the Russian his congratulations to his colleagues in Washington. But immediately afterwards they talked about trouble spots in the world: Syria, Ukraine and the Korean peninsula. Also discussed the Iranian nuclear program.

The governors were immediately agree on one thing: the need to combat international terrorist organizations such as Islamic State requires direct collaboration of the United States and Russia. That will have to be finalized at a meeting who want to keep the two leaders in the short term. Washington and Moscow will immediately arrange such a meeting.

Regardless of a personal encounter wants the pair together on a regular basis- probably by telephone- continue to speak.