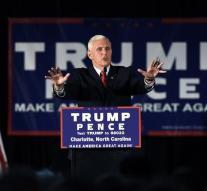 - Mike Pence, the designated vice president of Donald Trump, has given birth to stir Sunday by again to take a clear position other than the presidential candidate himself.

According to the governor of Indiana, there is no doubt that the Russians behind the recently hacked emails sit by the Democrats. ' All the evidence points in that direction, '' Pence said. ' Should follow serious consequences for Russia or any other country as it brings the privacy and security of the United States at risk. ''

Trump set earlier doubts about the Russian involvement. ' Maybe there are no hacks, '' he said.

On Russia, the two Republicans already expressed divergent views. Trump said during the second presidential debate that he and his running mate disagreed on the approach to the crisis in Syria, and Russia's role in it.

The disagreement between Trump and Pence follows after a weekend in which Trump had done hard with comments that the elections were rigged and manipulated by biased media. Although Pence Sunday vowed that he and Trump will respect the outcome on November 8, Trump repeated later in the day his accusations. He even claimed that in several election offices manipulation will be to help his opponent Hillary Clinton to victory.