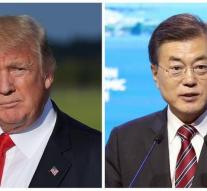 seoul - South Korean president Moon Jae-in and US President Donald Trump agree to exert more pressure on North Korea by sanctions, following its nuclear and rocket trials. The Presidential Office of South Korea informed this after a phone call between the two leaders on Sunday.

'The two leaders have agreed to strengthen cooperation and to exert heavier sanctions against North Korea, so that the country realizes that provocative actions lead to further diplomatic isolation and economic pressure,' said a spokesperson.

He further said that Moon and Trump strongly condemn North Korea's latest rocket launch and agreed that the two countries cooperate with the international community to implement the latest UN Security Council resolution.