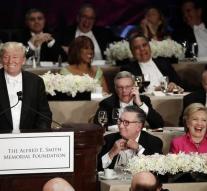 - The debates are over, but Thursday night were the US presidential candidates Hillary Clinton and Donald Trump yet again opposed. At the Alfred E. Smith Memorial Foundation Dinner made the candidates Trump and Clinton tradition itself and ridicule each other.

Trump set the ball rolling in the good 'roast' and Clinton painted with ironic wording off as corrupt, which came to be him boos from the audience. It helped his popularity in the hall not think he said a moment later that Clinton 'pretend they do not hate Catholics', referring to the hacked emails in which she is critical of senior people who embrace Catholicism as the most politically accepted belief.

The Democratic candidate saw that that Trump when assessing the attractiveness of the Statue of Liberty would probably give a four or at most five. She was referring to the derogatory statements about women Trump. Clinton ended by saying that '45 is the only nice number for a woman. 'Clinton would be the 45th president on election victory.

Incidentally, the candidates shaking this time the hands in contrast to the debate, the day before.