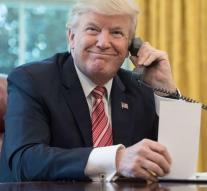 tokio - US President Donald Trump and Japanese Prime Minister Shinzo Abe agree that North Korea must be under pressure. They conducted a telephone call on Wednesday about the tense situation on the Korean peninsula.

Trump and Abe are both of the opinion that 'talking only for the purpose of talking' is meaningless. That said a Japanese government representative.

Over the last few weeks, the communist regime in Pyongyang has shot twice a long-haul route across Japan into the Great Ocean. In addition, the sixth nuclear test was conducted to illustrate that North Korean leader Kim Jong-un wants to have a rocket that can reach the US mainland as soon as possible.