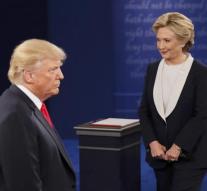 - Donald Trump appeared Sunday in the second debate with Hillary Clinton saying he wants to see his opponent behind bars if he becomes president.

The discussion at that time about Clinton email scandal, something that Clinton himself was ashamed according to Trump. 'If I win, I will investigate you. Never before have spread so many lies, 'said Trump.

Clinton said in a reaction that anything Trump had just said was a lie and that it is good that someone with the temperament of Donald Trump is not the boss of the law in the United States. 'Then you'd be in jail,' Trump snapped.