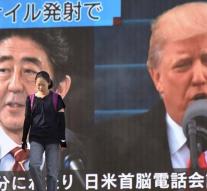 washington - All options are on the table, US President Trump declared in response to North Korea rocket launch. 'The world received loud and clear news from Pyongyang's latest message.'

The North Korean projectile flew over Japan. As a result, North Korean leader Kim Jung-un has shown his contempt for his neighbors, all members of the United Nations and acceptable international behavior, so the American president told us on Tuesday.