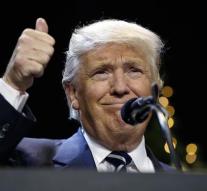 washington - President-elect Donald Trump on Thursday yet again made it clear that Israel will get him a lot more space than its predecessor Obama. Following a critical resolution by the UN Security Council last week adopted against settlement construction by Israel, Trump tweeted Wednesday: ' We can not allow Israel is treated with such contempt and disrespect. '

According to the man who obtains the White House three weeks, his country has lately been a good friend to Israel. ' The beginning of the end was the awful deal with Iran and now this. Be strong Israel, January 20 is coming soon, '' he concluded his message.

The resolution was approved Friday by fourteen of the fifteen members of the Security Council. The United States abstained. Israel had hoped for a veto.